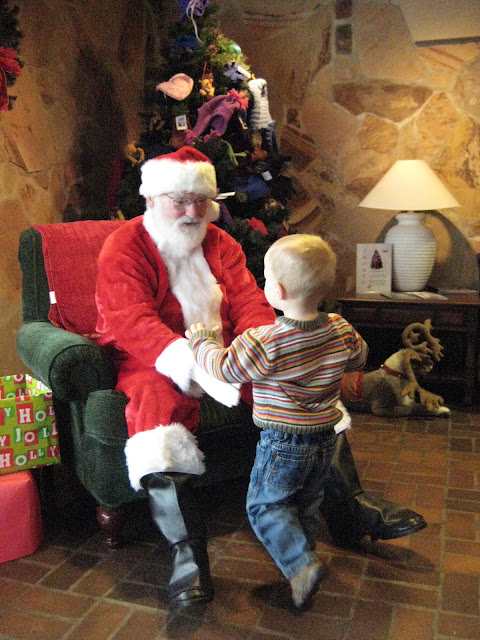 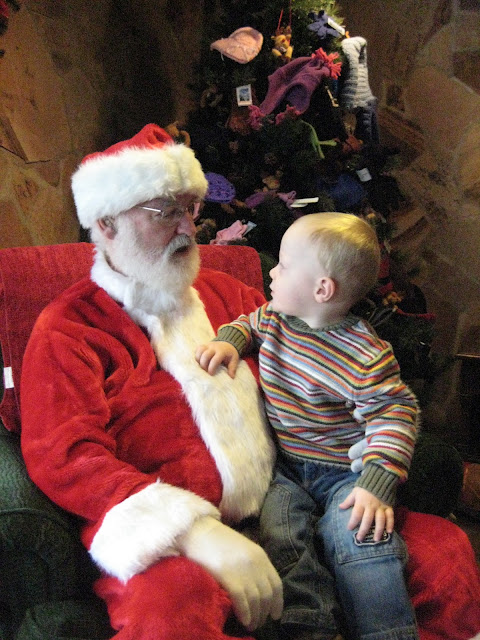 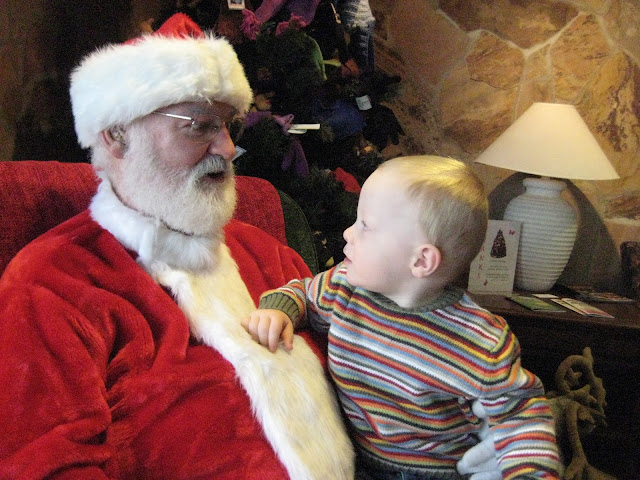 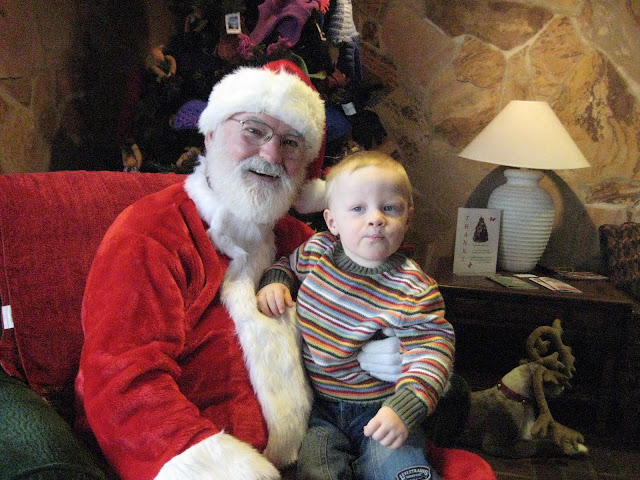 We ran into Santa at our bank a week or so ago. Gavin was so excited to tell Santa that he wanted "a twacto, a big one, a gween one!" He climbed right up on Santa's lap and rested his arm on Santa's big belly and they had a nice conversation about what Gavin wanted for Christmas. There was no mistaking it.
This, of course, was the day after a less successful attempt... The night before, we went to the Friday night fish fry at Kilkarney Hills Golf Course. The fish fry is always delicious and they always have a nice salad selection, yummy wild rice dish, potatoes, and a few varieties of fish, including Cajun-fried Walleye, Baked Cod, and Batter-fried Cod. It's all tasty, so worth the trip, but the environment can be a little, well... crazy. It's in a big banquet room filled with round tables that seat 8 or so, so there are lots of distractions for a toddler, including other kids running all over the place and people everywhere. It's loud and less than intimate, which would be my only complaint. The food though, is fantastic.
We went that night with a group of friends since we had heard that Santa and Mrs. Claus were going to be there. They were there and were as sweet as can be, and Gavin was cool with saying "hi Santa" and giving Santa a big high-five, but there was no lap-sitting. He gasped "Santa" when we saw Santa and Mrs. Claus sitting there, but he kept his distance of a foot or two from Santa, and took a step back again after the high-five to ensure he wasn't too close! Mrs. Claus did manage to lure him closer with a candy cane (twice!), but she lifted him onto her lap and he was already squirming off as I clicked the shutter button on my camera. Oh well!
I'm not sure what was different on day two, other than a bit of a quieter environment and not so many people. We talked to Gavin on the way in to the bank about sitting on Santa's lap. We told Gavin that Santa was old like Grandma and Grandpa and he didn't hear very well anymore. So, you have to get right up on his lap to tell him what you want for Christmas or he might not hear you.
We walked in to the bank and he climbed right up there. He would have sat there all day I think if we hadn't told him it was someone else's turn to sit with Santa. It was so much fun.
After talking to Santa, we enjoyed cheese and crackers and cookies and cider that the bank provided for customer appreciation. On our way out, Gavin gave Santa one more hug and we thanked Santa for being who he is!
Posted by Erin J at 12/28/2010

That is really cute!

Wow, that is the best Santa I have seen in a long time! Heather