I know I've mentioned before that Gavin loves being in the woods. ﻿Whenever we're playing out in our yard, he tends to gravitate toward three places - one of them is his sandbox, one is inside our shed, and the other is in the woods. I'm glad he loves his sandbox. That is a great place for him to play and a nice protected shady spot in the heat of summer. Now if only he can remember to keep the sand in the sandbox. He tends to "rake" it right out of the box, and send sand flying through the air. Lately, it's been a bit buggy in the sandbox. My best guess is that with the turn of the seasons, the bugs go there because it's more protected - it's on an inside corner of the house, under the screen porch, so the bugs get to stay out of the icky weather too. When Gavin and I were playing there on the weekend, we spotted a number of moths and spiders!
So, another spot he likes to play is the shed and I'd prefer that he didn't play in there. It's a storage shed and there are all sorts of safety hazards in there. He loves to climb on the lawnmower, which we can't allow because sometimes it's hot and he doesn't know when it is or isn't. We also store all kinds of lumber, equipment, fence parts, gardening tools, planters & pots, old paint cans and other potentially hazardous items in there, so it just isn't a good place for a little guy to play.
The third place he loves to play, and my favorite place too, is in our little patch of woods behind the shed. It's nice and shady, but not too thick, as we've been mowing a path through it for the last couple of years. The bugs like the woods too, but we don't mind too much, as it's such a good place for exploring. Gavin loves the seclusion of the woods - it's like he thinks it's secret in there. I love that about him! The woods are one of his favorite special places to be. When we're out for a walk along our road, we pass an entry path into our woods and Gavin always points in there and says "go in the woods". Even when we're out playing in the yard, he takes my hand and says, "Mommy come! In the woods! In here!"
For awhile he was telling me there were animals in the woods! Other than birds and maybe a squirrel, I haven't seen any animals in our woods, but I'm sure there are a few around occasionally - maybe a racoon or something once in a while. 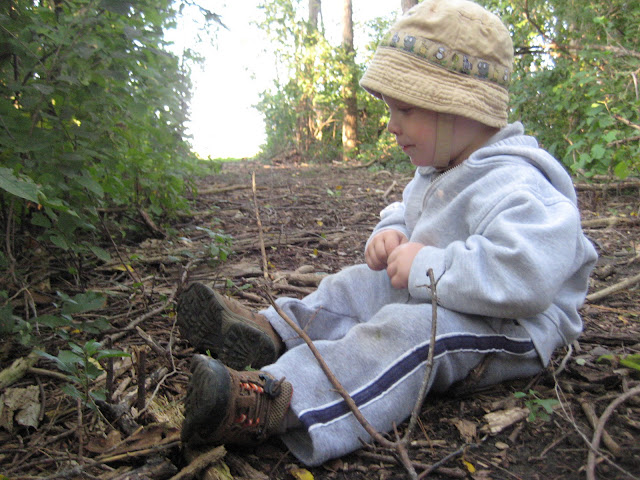 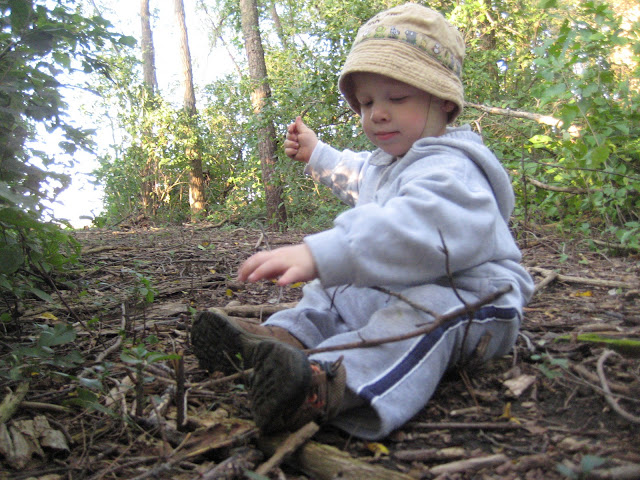 Lately, when we're in the woods, he wants to look for worms. He moves logs and rocks and bark aside and looks at what is crawling around underneath. We find worms, millipedes, pillbugs, spiders, and all kinds of other creepy crawly things. It would be really exciting if we found a salamander or a mouse, but no luck yet.
It's so exciting to see him show such interest in the world. To see his eyes widen and his voice squeal as he enthusiastically reports what he sees "a worm!" or rather "a wome!" as he says. Then he says "get it!" So we pick it up and watch it squirm around for a minute or so, and then we set it back in the soil and gently lay the log or rock back over it, being very careful not to squish it or anybody else taking shelter there! 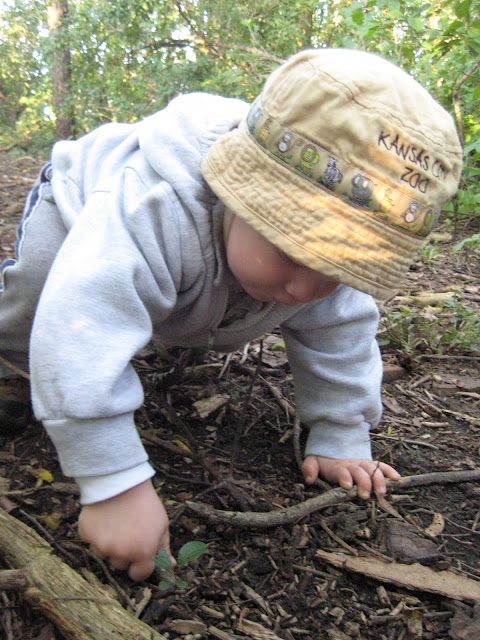 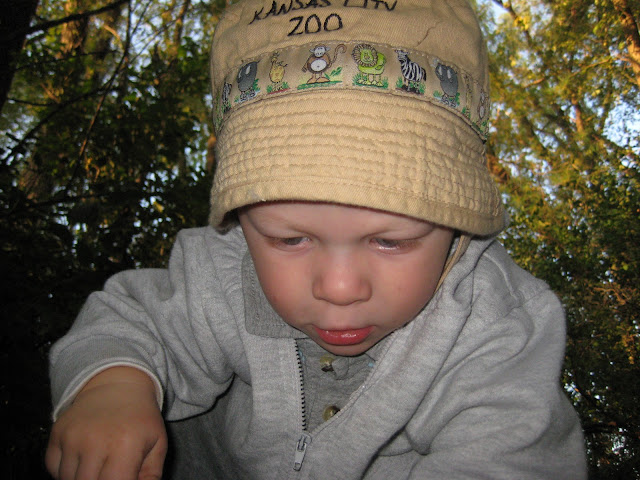 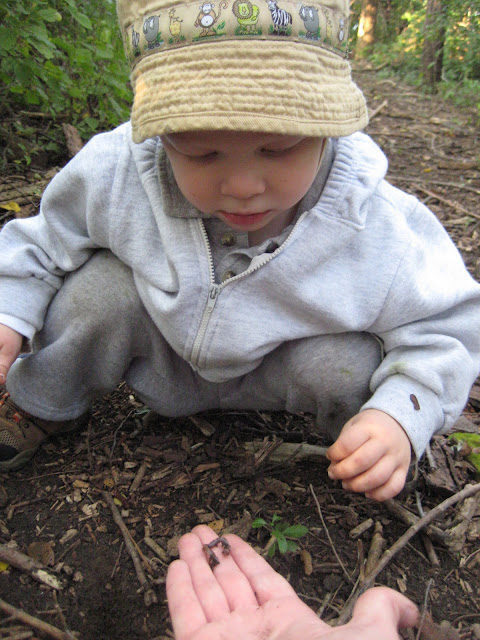 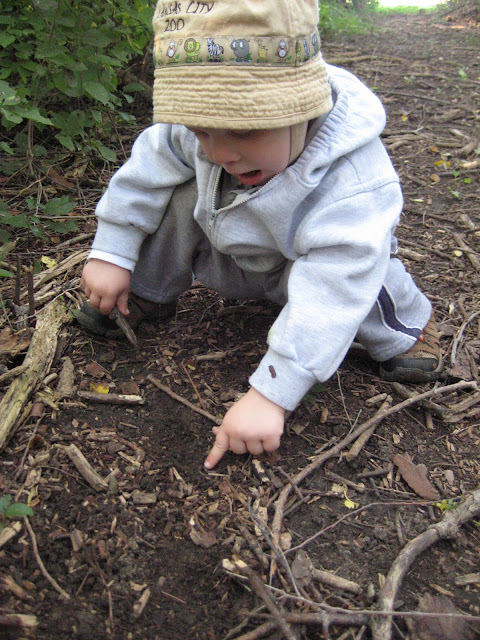 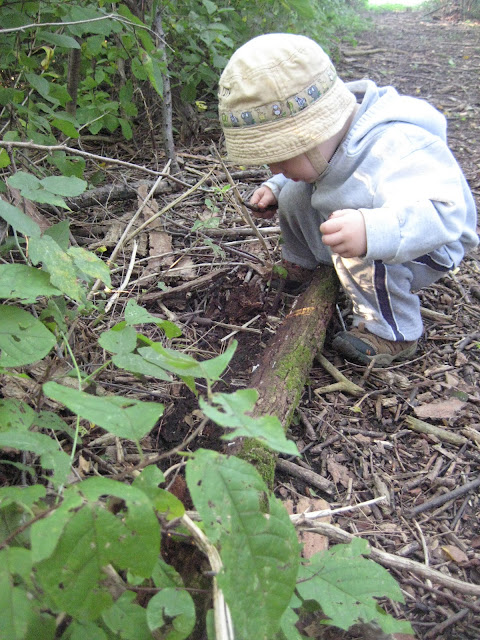 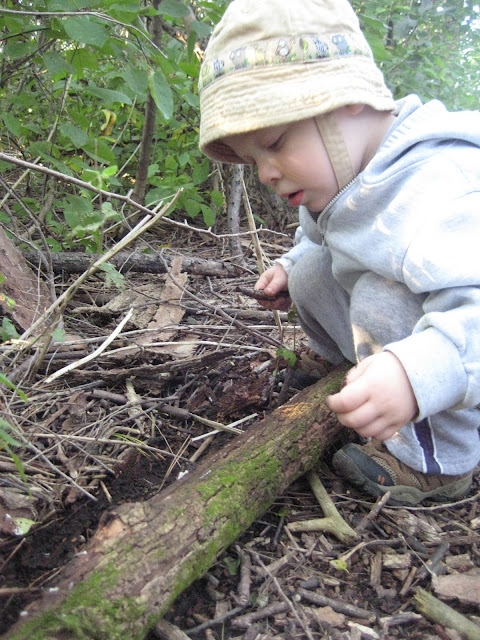 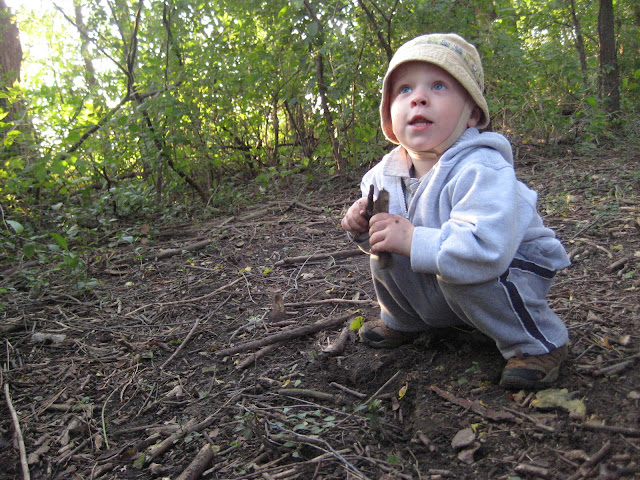 He's such an enthusiastic little explorer - I just love it! He collects acorns, pine cones, rocks, leaves, and anything else beautiful, interesting, and natural. I think he takes after me in that way. Today when we got to daycare, he veered off of the sidewalk at Jo's house and headed for the stunning golden colored maple tree in her front yard. He stood under it and looked up at the gorgeous canopy of leaves above him and said "wook momma, pwetty weaves"

I hope he always remembers to appreciate our world the way he does now!

I love that about him too! And right before I read it, I thought, "hmm, takes after his Momma!" Nice hat too:)

What a cutie... great post... loving the world & exploring is wonderful... I think I am glad I have girls though who never got excited about worms, spiders & bugs. :)
Heather