This winter was long and torturous for someone like me who loves to be outside in the sunshine digging in the dirt. Don't get me wrong, I actually LOVE snow! I love the first few snows in particular, but I love snow at any time. As much as I love snow though, by February I really miss the days when I can be outside, planting in my garden, pulling weeds, expanding flower beds, hanging hummingbird feeders, taking a rest in the grass, feeling the dirt between my toes...

By February, I need to be DOING something. If I can't be making beautiful changes outside, then I start making them inside. Sometimes a vase of bright tulips on the kitchen table does it, sometimes a blossoming apple branch in a copper pitcher does it, sometimes I want new furniture or new bedding. At our old house, I would always repaint a room - one year my girlfriends came over for the weekend and we stayed up all night repainting my kitchen and one year I repainted the bathroom while Cliff was out of town, adding new towels hooks, new white shelves, and a pretty blue & green bottle collection.

This year, I decided Gavin was a little boy now more than he was a baby, so he needed a little boy's room. It wasn't that his room was babyish, it was Kermit the Frog green afterall! Actually, the color was called Corn Husk Green, but somehow the painted walls don't actually match the Corn Husk Gren color swatch. Oh what fun that color has been! When Gavin was a newborn, we had a fun red, yellow, orange, green and brown striped mobile above his crib and we had matching window valances and matching striped baskets on his changing table. The spare bed in his room had a coordinating red quilt. It was cute! Once we took down the mobile and the changing table, however, the room started looking a little plain. It was basically a green room with a crib in it, a bed, and a bedside table. For awhile, we had a cedar chest in there to use as an additional display area for photos, etc. I decided Gavin's room would be an easy and fun room to redecorate or embellish and would likely solve my winter blues (grays). So, I got started. I found a fun bedding pattern in the same color scheme that we had used when he was littler. It was cute, but it didn't say "Gavin", so I kept looking. I got suggestions and opinions from girlfriends and sisters. We quickly realized Gavin couldn't possibly have a primary colored room. He wasn't a red, yellow, blue kid. He was an orange, brown, green kid. We also determined that there was no point in buying a crib bedding set at this point, since he was growing so quickly and would probably be moving into a big boy bed this fall. So, we decided we would buy bedding for a twin bed instead. My sister found this super cute safari bedding set, and I took the color cues from that. I was tempted to buy some adorable crib bedding that I had found too, but couldn't swallow the pricetag! Instead, I just bought the coordinating wall decals and applied those to his wall for a tiny fraction of the price of the bedding. Afterall, he doesn't use blankets (except his blankie for snuggling), he doesn't need a bumper pad, a crib skirt is sort of useless. So, really I would have been paying an arm and a leg - wait, two arms and a leg and a kidney - for just a sheet and the sheet didn't have the pattern on it anyway!

I liked the "circle theme" of the wall decals and the room decor needed some height, so I picked up two coordinating paper lanterns for around $6 each from amazon.com. I swapped out the blue lamp with a white one from the basement and put a couple of the extra wall decals on the lampshade to tie it all together.

I had my heart set on a white bench for under the window with cubbies underneath for baskets of toys and books. I could get one for $100. Cliff thought he could make one for less, but that seemed like a lot of work and it may have cost just as much. We were supposed to go to Menards one Saturday to price out the materials to make a bench and before we went, I found these great little rolling cubes at a garage sale for $3 each. A little goo gone, some clorox wipes, and a bit of elbow grease and they were good as new and are working perfectly for what we needed. They aren't quite as "finished" looking as I had imagined, but they really are working well and they will hold up for a LONG time. They're actually office furniture components, so they're made of some sort of hard-core laminate material.

We took his chick quilt off the wall and we lay it down on his floor for a soft place to snuggle up for story time or cuddling. It's a perfect "grounding" space and we can lay the quilt down chick side up or chick side down. It looks a little like a rug, centering the space, but is a wonderful snuggle spot when we pull out his stuffed animals and blankies.

Although we had some photos on his dresser, we really needed something up on the wall. That was easy! We have lots of cute pics of Gavin! We spray-painted some old photo frames white and cut mats out of coordinating cardstock from the scrapbook store. We've got three pictures up now, but I have two more frames to fill and hang. The plan is to hang photos of Gavin with the people (and pets) that he loves so he can look at them and see his family and friends. Now we just need to make a point to take more photos like that instead of photos of just him!

We're still working on a white headboard for his bed, but the room is starting to come together. As soon as we put the final coat of white paint on the headboard that we built, we'll move that in and the room redecoration will be complete.

Oh, what fun it is to have a reason to redecorate! 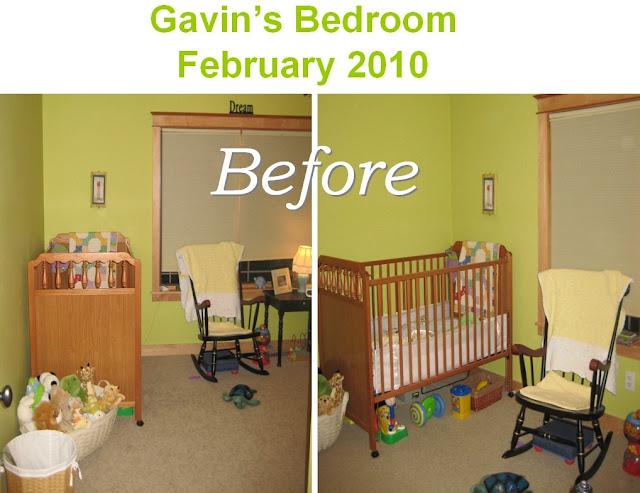 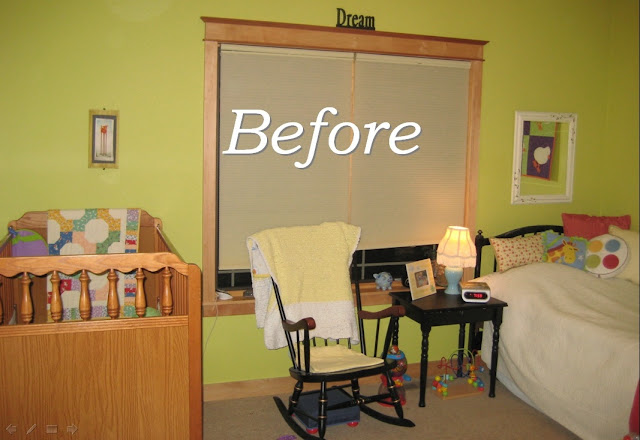 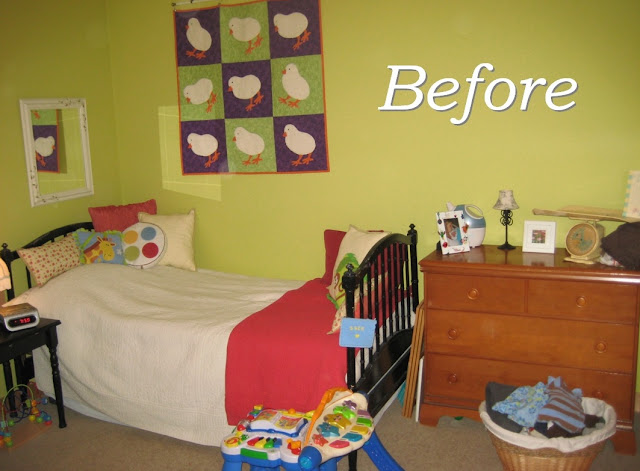 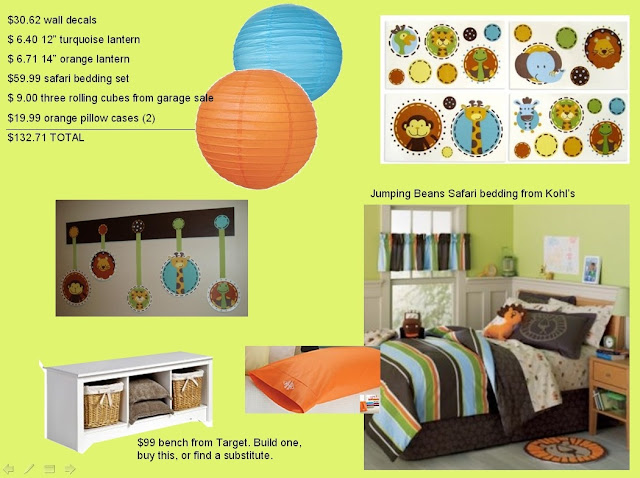 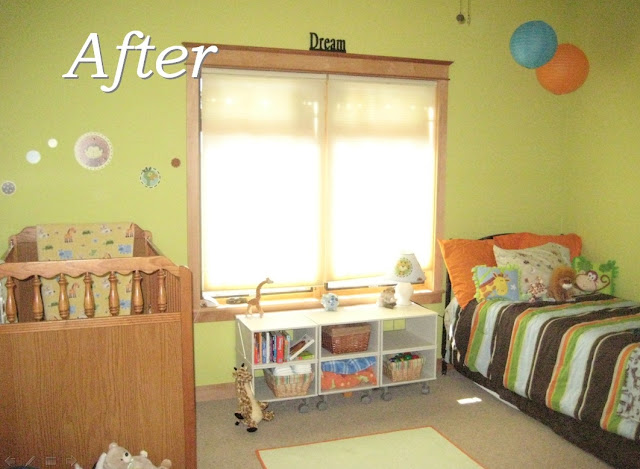 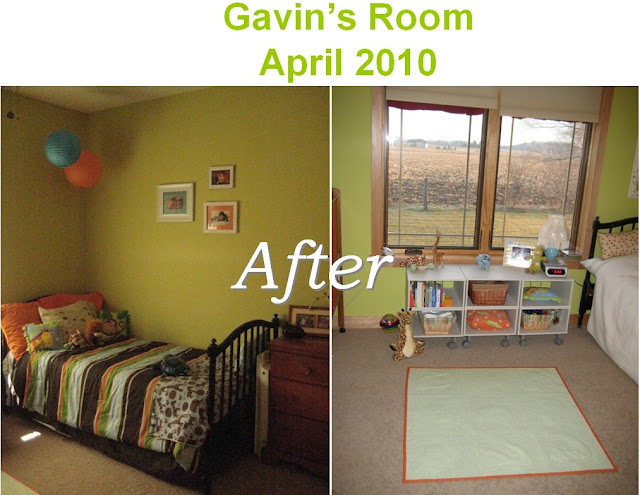 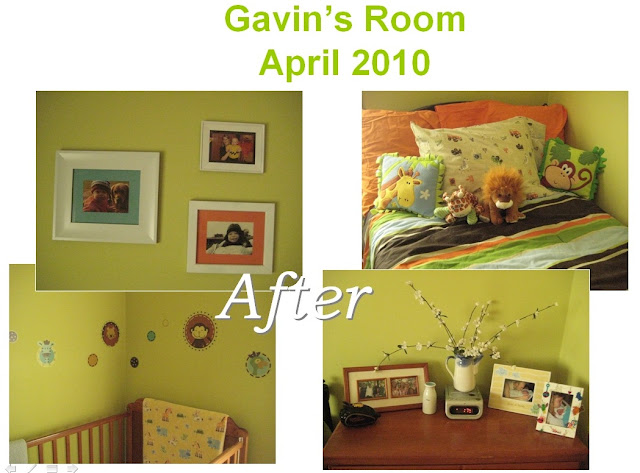 I apologize for the variation in color in these photos. We did not paint the walls, but Gavin's windows let in an enormous amount of light, and with the bright green walls, it's actually very difficult to get a good photo of the actual wall color. The bottom photo of the flower arrangement and frames on his dresser is probably one of the most accurate, although it's still just a little washed out in that one too.
Posted by Erin J at 4/19/2010

Love the room! My little Josh has the same bedding. He loves the animals and fun colors :)